I was ready to go with a little essay about how I ultimately figured out the area of a trapezoid, based on the formula for the area of triangles, when I realized that it was much easier to show this with a diagram. And I had a diagram drawn out pretty well, at least to the limits of my drawing ability and my power to use Photoshop Elements to do the drawing. But then it struck me that there’s a peril in using a diagram when you want to prove anything, and the nature of those perils deserved some attention.

A diagram can do wonders in crystallizing one’s understanding of what a problem is actually asking, and help one get to a solution. This is particularly so when the problem calls on any kind of geometric considerations. But a diagram also encourages the viewer to make assumptions, in particular, that whatever is being talked about will look like this. I’m not talking about deliberate deceptions, as with the occasional logic puzzle which proves some fallacious result by letting an illustration which looks plausible but actually contains some error. I just mean diagrams that encourage the making an assumption which might not be true. They can lead work astray.

I’m going to need some terminology to hopefully reduce confusion. A trapezoid has two parallel lines; those two lines we call bases. Typically one’s shorter and one’s longer, so, we have the short base and the long base. There are also two other lines, generally at some kind of odd angle. Those we call the legs. 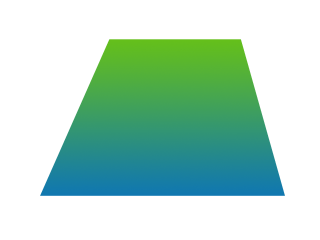 So I started drawing examples of trapezoids, beginning with what might be almost the generic standard-issue trapezoid. At least, it’s the kind I see when I look up formulas for trapezoid area and its other interesting properties, in case it has any. The long base is on the bottom, as if we’re worried it might tip over if laid down the other way. The short base floats above the long one, and the two non-parallel sides aren’t particularly long compared to the long base. It’s almost the archetypical trapezoid. There’ve even been the occasional efforts to create a convenient little symbol meaning “the trapezoid”, in much the same way a Δ can be used to represent a triangle, and they use trapezoids that look like this.

A particular case — a special case, really — of the trapezoid is called the isosceles trapezoid. In that one the two non-parallel legs have the same length, and they both make the same angles with respect to the parallel lines. If you were to extend the non-parallel lines until they came together, the lines and either of the bases would make an isosceles triangle. The short base is centered just above the long base. If it’s possible to make a trapezoid more iconically trapezoid, this is the way to do it.

But that doesn’t have to be so. For example, there’s no need for the short base to be positioned particularly above the long base. It might extend to the right (or the left) of the short leg, and have the legs stretch out at pretty extreme angles. The legs might even be longer than one or both of the bases.

This one shows off how those unstated assumptions can haunt a proof. When I brought up the subject Chiaroscuro did a nice little demonstration of why the formula for a trapezoid’s area has to be so, and he did it by chopping the trapezoid into a rectangle plus two triangles, then figuring out the rectangle area and figuring out the area of those triangles mooshed together. This works very nicely for the isosceles trapezoid, and for the generic trapezoid described up above. And we can use the same sort of reasoning for this off-kilter trapezoid, but we have to put more work into it. There’s not an obvious rectangle to chop out of it, and if we tried slicing triangles off the edges and fitting them together we’d have the figure fall apart. This can be salvaged, and it’s a good exercise to salvage it, but it means the obvious proof needs to be shored up or, worse, to consider special cases. Breaking up a proof into several special cases is logically fine, and sometimes the easiest way to do it, but the human patience for special cases is finite and we’d like to avoid that if we can.

15 thoughts on “Setting Out To Trap A Zoid”