(It strikes me, this might just as well be Trapezoid Week here. )

Since I did work out the area of a trapezoid starting from the area formula for triangles, and since I was embarrassed to have not seen it sooner, I decide to share it here, where it may do someone some good, particularly if it’s me for next time I teach a class like this. The punch line is known far ahead of time. The trapezoid is a four-sided figure with two sides parallel. The parallel sides have lengths b1 and b2; they’re considered bases. The two bases are an altitude a apart. The area of the trapezoid then is a * (b1 + b2)/2.

I’m going to start with a diagram, showing a trapezoid with the two lines that aren’t parallel extended until they come to a point. I’ve written about some of the ways that a diagram can trap us into expecting things to be one way or another, so I want to make explicit the assumptions which go into this diagram. 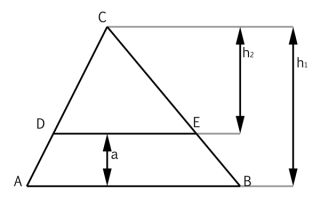 Here I drew the two parallel lines, the bases, so that they’re horizontal. They don’t need to be, except that it was easier for me to draw that way. They could be on an angle, but then, I could rotate the paper I drew them on — or, tilt my head, since I drew this in Photoshop — until they were horizontal again. I also drew the two slanted lines, the legs, so that, when extended, they come to a point on top. I could have the extended lines come to a point either above or below the bases, and I picked above because the top looked better to me.

This is making an assumption about the trapezoid, in particular, it’s assuming that the two legs, extended this way, do eventually come together. If they didn’t, that would be because the two other legs were parallel and the figure was a parallelogram or a rectangle (or square). Late last essay, I tossed parallelograms and rectangles in with trapezoids to make life easier for myself. Here, I throw them out of the trapezoid set. What I do here won’t work for a parallelogram or rectangle, but then, we have formulas for the areas of those anyway. (Later on I may do a version of this where we don’t have to make any assumptions about how the legs come together, and that will work for all kinds of trapezoids and parallelograms and rectangles, if I haven’t given it away just by saying that.)

Finally I picked how slanted the legs were so as to look good, not to say they have to be this much or this little slanted. This is another way of saying I picked the length of the short base, and where it was centered compared to the long base’s centerline, just so it looked right. That doesn’t affect the proof any.

There are a couple capital letters on the drawing, all of them near a corner, which gets called a vertex when we want to sound mathematical. Those labels are for convenience. If you try talking about features of a polygon without having labels like this your text starts to read like a metes-and-bounds deed description of a property and not something humans should stare at too much. The idea of using capital letters to describe features within a triangle seems to date to somewhere between 1655 and 1668, in a pamphlet written by Richard Rawlinson, at Oxford, which is about all I know about him. Leonhard Euler (apparently) reinvented the idea, using capital letters for the angles, and that may as well have made the notation official. Thomas Simpson, an English mathematician whose name is tromped all over the parts of freshman calculus that follow Newton and Leibniz, also gave this notation a boost by using it and being read. (He also seems to have invented the form of what’s called Newton’s Method Of Iteration, or the Newton-Raphson method — it’s a way of finding what values of x make a function f(x) equal to zero — in the format anyone uses today.)

Then there are some lowercase letters. These get used for lengths or distances rather than to direct the attention to any particular point, at least in this diagram. Here, b1 is the length of the really big triangle, the one with the points A, B, and C as the vertices. That’s in shorthand called triangle ABC. And h1 is the height of the triangle ABC: it’s the shortest distance from the point C to any point on the line containing points A and B.

Also here, b2 is the length of the second base, the one connecting points D and E. h2 is the height of the smaller triangle DEC, the one with vertices D, E, and C.

The trapezoid is the figure which has the vertices A, B, E, and D. For shorthand we’d describe that as the figure ABED.

That puts all our symbols in good order, and gives us numbers — well, symbols representing numbers — for all the relevant dimensions of this demonstration. Doing the work is another brief essay.

3 thoughts on “Drawing A Trapezoid’s Picture”