[ I figure this to be the last important bit of Trapezoid Week. ]

I have one last bit of proving the area formula for the trapezoid, and figure this should wrap up all the exposition I mean to do here. I’m starting again with a trapezoid, with the two parallel bases AB and DE drawn so they’re horizontal. I’m making no assumptions about the legs AD and BE; they might be parallel, they might not be. This makes a proof that’s improved from the difference-of-triangles proof, since it works for more shapes. It’ll work naturally for parallelograms and rectangles, whether you want them to be trapezoids or not. It’s also improved from the twin-trapezoid proof, because it requires so much less extra work. 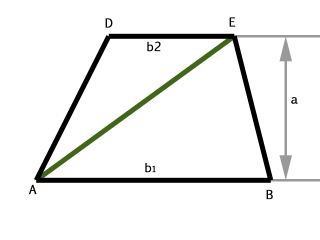 Here, as Jorgen Harmse coincidentally suggested (I wrote this before he posted his comment), I draw in just one line. It’s a diagonal, connecting either points A and E or else points B and D. It doesn’t matter which; the proof works the same either way. I’m using the diagonal from A to E for this proof, but the other way around is literally just a matter of swapping letters, ABD for ABE and DBE for DAE.

And calling on our old friend the distributive property again:

That’s probably the best proof we could make, since it requires so few extra lines to draw, so little extra work, makes no assumptions about what the two legs other than the bases are, and requires the remembering of nothing besides the area of a triangle, which we should certainly know by now.

This also leads into a nice idea about figuring out the shapes of polygons in general. We may have no idea how to find the area of a nonagon, and might need to look it up somewhere to figure out what that even is, but we can slice the polygon up into triangles, and so into a bunch of shapes whose areas are themselves easy to work out. That’s often a good approach to a problem: split up a complicated problem into a long series of easily evaluated little ones. This is particularly a good approach if you have a computer or a teaching assistant to do the easily evaluated little problems. Those who have to do the calculating themselves might have a different opinion.

One thought on “Or, Work It Out The Easy Way”