[ Huh. My statistics page says that someone came to me yesterday looking for the “mathematics behind rap music”. I don’t doubt there is such mathematics, but I’ve never written anything approaching it. I admit that despite the long intertwining of mathematics and music, and my own childhood of playing a three-quarter size violin in a way that must be characterized as “technically playing”, I don’t know anything nontrivial about the mathematics of any music. So, whoever was searching for that, I’m sorry to have disappointed you. ]

Now, let me try my first guess at saying whether it’s easier to tip the cube over by pushing along the middle of the edge or by pushing at the corner. I laid out the ground rules, and particularly, the symbols used for the size of the box (it’s of length

) and how far the center of mass (the dead center of the box) is from the edges and the corners last time around. Here’s my first thought about what has to be done to tip the box over: we have to make the box pivot on some point — along one edge, if we’re pushing on the edge; along one corner, if we’re pushing on the corner — and so make it start to roll. If we can raise the center of mass above the pivot then we can drop the box back down with some other face to the floor, which has to count as tipping the box over. If we don’t raise the center of mass we aren’t tipping the box at all, we’re just shoving it. 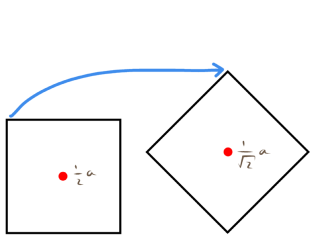 Let’s suppose that to make the box tip over we do have to raise the center of mass above whatever our pivot point is. Then one way of figuring out which approach is harder comes from thinking about the amount of energy you have to put into the box to get that center of mass above the pivot point. Raising the center of mass means increasing the amount of potential energy (from gravity) that the box has. So, naively, I’d think that whichever method requires that I put in more energy would be the harder way to tip the box. 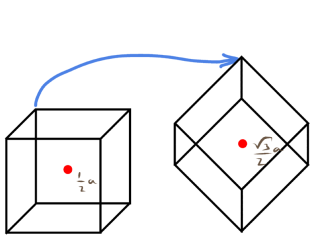 So how much energy does it take to tip the box over from the edge? Well, imagine the box seen from the side. The center of mass is a height

above the floor. Now tip it over, let’s say, clockwise, around the lower left corner. The center of mass rises as the box keeps tipping, until it reaches a greatest possible height, of

above the floor, and then starts dropping down again. That’s as much as we have to raise the center of mass; we’re making it roll, not kicking it off the floor.

So how much energy do we have to put in, in turning the box so its center goes from its horizontal height to its diagonal height? The potential energy from gravity of an object of mass

, when the gravity’s acceleration is

, with a center of mass at the height

. So the difference in energy E, written as

, between the maximum, where the height is

, and the minimum, where the height is

. But pivoting the box on the corner gets the center of mass to a height as great as

. So the amount of energy that has to be put in to move the box to where it really can tip over is:

So whatever the size of the box, and whatever its mass, it looks as though it takes not quite twice as much energy to push the box up to where it can fall over on its corner as it does to push it to rolling over its edge. This, at least, argues that the box is more stable, that is, harder to tip over, if you’re trying to push it from the corner than it is from the edge.

However. I can think of a different argument. The results might be different.

4 thoughts on “One Way To Fall Over”