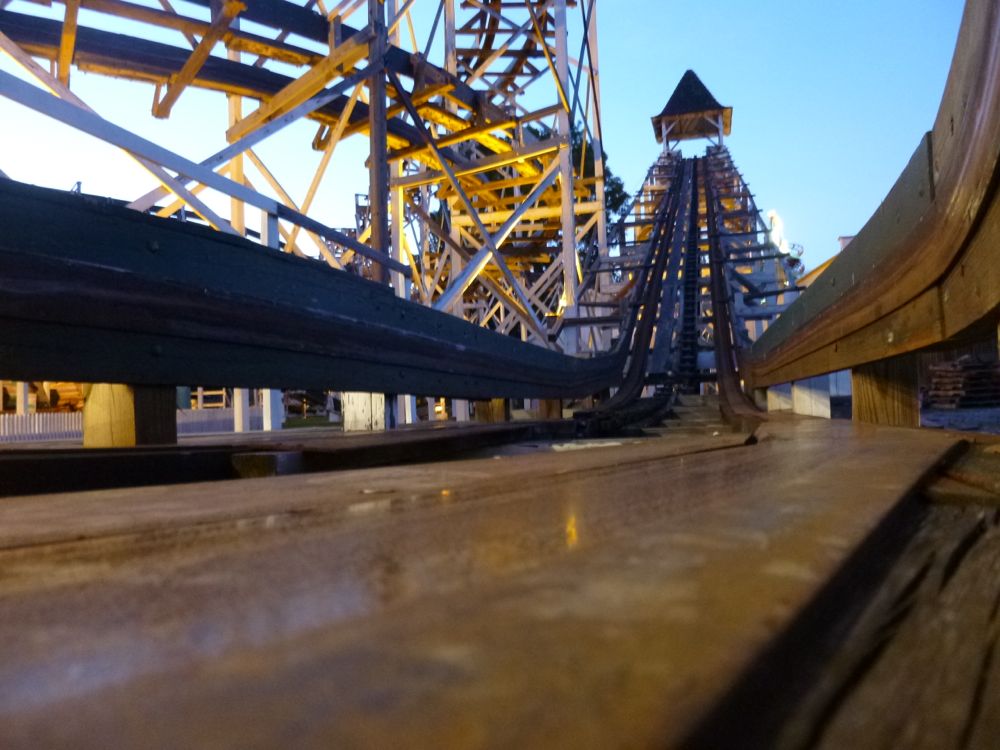 Several years ago I had the chance to go to Lakemont Park, in Altoona, Pennsylvania. It’s a lovely and very old amusement park, featuring the oldest operating roller coaster, Leap The Dips. As roller coasters go it’s not very large and not very fast, but it’s a great ride. It does literally and without exaggeration leap off the track, though not far enough to be dangerous. I recommend the park and the ride to people who have cause to be in the middle of Pennsylvania.

I wondered whether any boards in it might date from the original construction in 1902 by the E Joy Morris company. If we make some assumptions we can turn this into a probability problem. It’s a problem of a type that always seems to be answered 1/e. (The problem is “what is the probability that any particular piece of wood has lasted 100 years, if a piece of wood has a one percent chance of needing replacement every year?”) That’s a probability of about 37 percent. But I doubted this answer meant anything. My skepticism came from wondering why every piece of wood should be equally likely to survive every year. Different pieces serve different structural roles, and will be exposed to the elements differently. How can I be sure that the probability one piece needs replacement is independent of the probability some other piece needs replacement? But if they’re not independent then my calculation doesn’t give a relevant answer.

A recent post on the Usenet roller coaster enthusiast newsgroup rec.roller-coaster, in a discussion titled “Age a coaster should be preserved”, suggests I was right in my skepticism. Derek Gee writes:

According to the video documentary the park produced around
1999, all of the original upright lumber was found to be in excellent shape.
The E. Joy Morris company had waterproofed it by sealing it in ten coats of
paint and it was old-growth hardwood. All the horizontal lumber was
replaced as I recall.

I am aware this is not an academically rigorous answer to the question of how much of the roller coaster’s original construction is still in place. But it is a lead. It suggests that quite a bit of the antique ride is as antique as could be.