I wanted to explain what’s going on that my little toy universes with three kinds of elements changing to one another keep settling down to steady and unchanging distributions of stuff. I can’t figure a way to do that other than to introduce some actual mathematics notation, and I’m aware that people often find that sort of thing off-putting, or terrifying, or at the very least unnerving.

There’s fair reason to: the entire point of notation is to write down a lot of information in a way that’s compact or easy to manipulate. Using it at all assumes that the writer, and the reader, are familiar with enough of the background that they don’t have to have it explained at each reference. To someone who isn’t familiar with the topic, then, the notation looks like symbols written down without context and without explanation. It’s much like wandering into an Internet forum where all the local acronyms are unfamiliar, the in-jokes are heavy on the ground, and for some reason nobody actually spells out Dave Barry’s name in full.

Let me start by looking at the descriptions of my toy universe: it’s made up of a certain amount of hydrogen, a certain amount of iron, and a certain amount of uranium. Since I’m not trying to describe, like, where these elements are or how they assemble into toy stars or anything like that, I can describe everything that I find interesting about this universe with three numbers. I had written those out as “40% hydrogen, 35% iron, 25% uranium”, for example, or “10% hydrogen, 60% iron, 30% uranium”, or whatever the combination happens to be. If I write the elements in the same order each time, though, I don’t really need to add “hydrogen” and “iron” and “uranium” after the numbers, and if I’m always looking at percentages I don’t even need to add the percent symbol. I can just list the numbers and let the “percent hydrogen” or “percent iron” or “percent uranium” be implicit: “40, 35, 25”, for one universe’s distribution, or “10, 60, 30” for another.

Letting the position of where a number is written carry information is a neat and easy way to save effort, and when you notice what’s happening you realize it’s done all the time: it’s how writing the date as “7/27/14” makes any sense, or how a sports scoreboard might compactly describe the course of the game:

To use the notation you need to understand how the position encodes information. “7/27/14” doesn’t make sense unless you know the first number is the month, the second the day within the month, and the third the year in the current century, and that there’s an equally strong convention putting the day within the month first and the month in the year second presents hazards when the information is ambiguous. Reading the box score requires knowing the top row reflects the performance of the visitor’s team, the bottom row the home team, and the first nine columns count the runs by each team in each inning, while the last three columns are the total count of runs, hits, and errors by that row’s team.

If a matrix has just the one column, it’s often called a vector. If a matrix has the same number of rows as it has columns, it’s called a square matrix. Matrices and vectors are also usually written with either straight brackets or curled parentheses around them, left and right, but that’s annoying to do in HTML so please just pretend.

The matrix as mathematicians know it today got put into a logically rigorous form around 1850 largely by the work of James Joseph Sylvester and Arthur Cayley, leading British mathematicians who also spent time teaching in the United States. Both are fascinating people, Sylvester for his love of poetry and language and for an alleged incident while briefly teaching at the University of Virginia which the MacTutor archive of mathematician biographies, citing L S Feuer, describes so: “A student who had been reading a newspaper in one of Sylvester’s lectures insulted him and Sylvester struck him with a sword stick. The student collapsed in shock and Sylvester believed (wrongly) that he had killed him. He fled to New York where one os his elder brothers was living.” MacTutor goes on to give reasons why this story may be somewhat distorted, although it does suggest one solution to the problem of students watching their phones in class.

Cayley, meanwhile, competes with Leonhard Euler for prolific range in a mathematician. MacTutor cites him as having at least nine hundred published papers, covering pretty much all of modern mathematics, including work that would underlie quantum mechanics and non-Euclidean geometry. He wrote about 250 papers in the fourteen years he was working as a lawyer, which would by itself have made him a prolific mathematician. If you need to bluff your way through a mathematical conversation, saying “Cayley” and following it with any random noun will probably allow you to pass.

MathWorld mentions, to my delight, that Lewis Carroll, in his secret guise as Charles Dodgson, came in to the world of matrices in 1867 with an objection to the very word. In writing about them, Dodgson said, “”I am aware that the word `Matrix’ is already in use to express the very meaning for which I use the word `Block’; but surely the former word means rather the mould, or form, into which algebraical quantities may be introduced, than an actual assemblage of such quantities”. He’s got a fair point, really, but there wasn’t much to be done in 1867 to change the word, and it’s only gotten more entrenched since then.

I was reading a biography of Donald Coxeter, one of the most important geometers of the 20th century, and it mentioned in passing something Coxeter referred to as Morley’s Miracle Theorem. The theorem was proved in 1899 by Frank Morley, who taught at Haverford College (if that sounds vaguely familiar that’s because you remember it’s where Dave Barry went) and then Johns Hopkins (which may be familiar on the strength of its lacrosse team), and published this in the first issue of the Transactions of the American Mathematical Society. And, yes, perhaps it isn’t actually important, but the result is so unexpected and surprising that I wanted to share it with you. The biography also includes a proof Coxeter wrote for the theorem, one that’s admirably straightforward, but let me show the result without the proof so you can wonder about it.

First, start by drawing a triangle. It doesn’t have to have any particular interesting properties other than existing. I’ve drawn an example one. 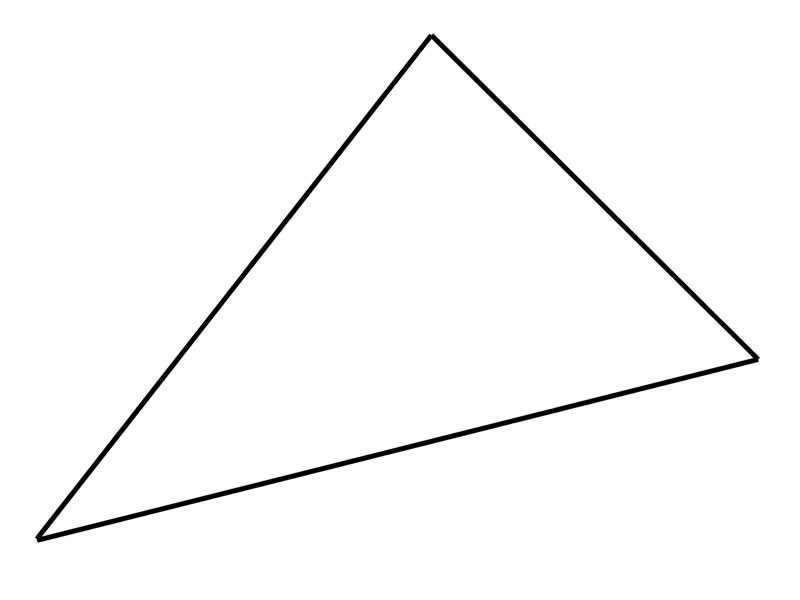 The next step is to cut into three equal pieces each of the interior angles of the triangle, and draw those lines. I’m doing that in separate diagrams for each of the triangle’s three original angles because I want to better suggest the process. 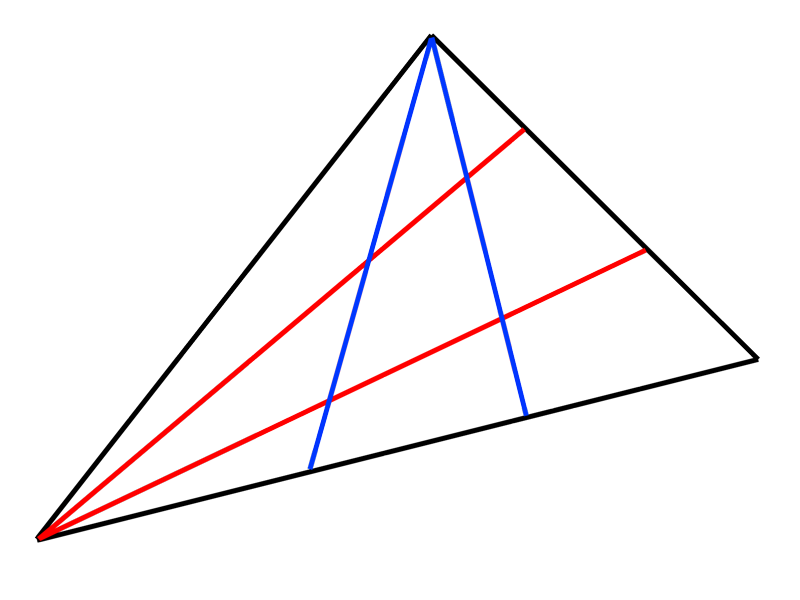 I should point out, this trisection of the angles can be done however you like, which is probably going to be by measuring the angles with a protractor and dividing the angle by three. I made these diagrams just by sketching them out, so they aren’t perfect in their measure, but if you were doing the diagram yourself on a sheet of scratch paper you wouldn’t bother getting the protractor out either. (And, famously, you can’t trisect an angle if you’re using just compass and straightedge to draw things, but you don’t have to restrict yourself to compass and straightedge for this.)

This new triangle, drawn in purple on my sketch, is an equilateral triangle!

(It may look a little off, but that’s because I didn’t measure the trisectors when I drew them in and just eyeballed it. If I had measured the angles and drawn the new ones in carefully, it would have been perfect.)

I’ve been thinking back on this and grinning ever since reading it. I certainly didn’t see that punch line coming.

I don’t understand why, but an awful lot of the advice I see about blogging says that it’s important not just to keep track of how your blog is doing, but also to share it, so that … numbers will like you more? I don’t know. But I can give it a try, anyway.

For June 2013, according to WordPress, I had some 713 page views, out of 246 unique visitors. That’s the second-highest number of page views I’ve had in any month this year (January had 831 views), and the third-highest I’ve had for all time (there were 790 in March 2012). The number of unique visitors isn’t so impressive; since WordPress started giving me that information in December 2012, I’ve had more unique visitors … actually, in every month but May 2013. On the other hand, the pages-per-viewer count of 2.90 is the best I’ve had; the implication seems to be that I’m engaging my audience.

The most popular posts for the past month were Counting From 52 to 11,108, which I believe reflects it getting picked for a class assignment somehow; A Cedar Point Follow-Up, which hasn’t got much mathematics in it but has got pretty pictures of an amusement park, and Solving The Price Is Right’s “Any Number” Game, which has got some original mathematics but also a pretty picture.

My all-time most popular posts are from the series about Trapezoids — working out how to find their area, and how many kinds of trapezoids there are — with such catchy titles as How Many Trapezoids I Can Draw, or How Do You Make A Trapezoid Right?, or Setting Out To Trap A Zoid, which should be recognized as a Dave Barry reference.

My most frequent commenters, “recent”, whatever that means, are Chiaroscuro and BunnyHugger (virtually tied), with fluffy, elkelement, MJ Howard, and Geoffrey Brent rounding out the top six.

The most common source of page clicks the past month was from the United States (468), with Brazil (51) and Canada (23) taking silver and bronze. And WordPress recorded one click each from Portugal, Serbia, Hungary, Macedonia (the Former Yugoslav Republic), Indonesia, Argentina, Poland, Slovenia, and Viet Nam. I’ve been to just one of those countries.